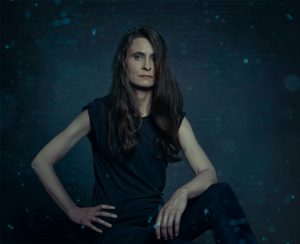 Composer, producer and experimental harpist Nerissa Schwarz has always defied categorisation – both as an award-winning solo artist and with her critically acclaimed band Frequency Drift, which released eight albums and played festivals all over Europe.

Following a collaboration under the moniker Coronal Rain, Nerissa Schwarz was asked to join Frequency Drift as guest composer and musician for their 2011 album “Ghosts”. She soon became a member, writer and producer of the band, with her unusual electric harp arrangements shaping Frequency Drift’s sound.

In 2016, Nerissa Schwarz released her first solo album, the dark and cinematic “Playgrounds Lost”. With her knack for creating scores of imaginary films, she explored themes of childhood on the album, combining folk-like melodies with uncanny soundscapes and carefully crafted composition. Her second solo album “New Eyes for Laika”, which released on 22nd April 2022, features Schwarz’s characteristic innovative harp sounds alongside organic piano and a variety of spacey keyboards.

This website uses cookies to improve your experience while you navigate through the website. Out of these cookies, the cookies that are categorized as necessary are stored on your browser as they are essential for the working of basic functionalities of the website. We also use third-party cookies that help us analyze and understand how you use this website. These cookies will be stored in your browser only with your consent. You also have the option to opt-out of these cookies. But opting out of some of these cookies may have an effect on your browsing experience.
Necessary Always Enabled
Necessary cookies are absolutely essential for the website to function properly. This category only includes cookies that ensures basic functionalities and security features of the website. These cookies do not store any personal information.
Non-necessary
Any cookies that may not be particularly necessary for the website to function and is used specifically to collect user personal data via analytics, ads, other embedded contents are termed as non-necessary cookies. It is mandatory to procure user consent prior to running these cookies on your website.
SAVE & ACCEPT